My favorite tweets of all time, part 2

Much like reading any Jeeves and Wooster story, going through my "favorites" on Twitter is a guaranteed good time. These are just some of the tweets I have favorited since the last time I did this.


This is funny because it's irony week.

Adam Peterson (‏@AdamWPeterson): If you can't spot the crazy person in the coffeeshop then you are in your apartment.


Comedy fact: Crazy people are always funny until they threaten to slit your throat.

Gaby Dunn (‏@gabydunn): It's always weird to see a nerd smoking a cigarette. Like, aren't you supposed to know science, nerd?!


Making fun of nerds was always cool, but it's meta-cool on Twitter, where nerds are king.

nadya lev (‏@nadya): Just won "pants before noon" for the first time in weeks. This game is hard.


The only time I win this game is when I go to brunch.

Matthew Simmons ‏(@matthewjsimmons): If there's only one other person on the bus, it's impolite not to sit with them.


It's funny because it's the opposite.

Nick Moran (‏@nemoran3) Shout out to indigo for trying to convince everyone it isn't the same color as blue.


Ha ha! Indigo. (Real talk: This episode of Radiolab on why the sky isn't blue is pretty rad, and I hate NPR.)

rob delaney ‏(@robdelaney):  ?? RT @BarackObama: How many sausages do you think there are, total? I guess the # changes... people eat some, new sausages get made. Hmm.


I don't know if Rob Delaney invented the form of commenting on a fake RT of POTUS, but he certainly perfected it.

Molly Laich (‏@MollyL): I saw a coyote with a crow in its mouth. Guess what; it was awesome.


I'm the only one who faved this tweet? Bullshit.

Mister Simian (‏@MisterSimian): I may not be human, but if you bleed me, are you not a prick?


You know what they say about monkeys and typewriters.

Kelly* (‏@kellyasterisk): I really wish palindrome was a palindrome. Someone really shit the bed on naming words that day


Words that aren't autological can fuck themselves.

Steve Himmer (‏@SteveHimmer): I don't like to think the worst of people, such as they're ignoring my emails on purpose. So I just assume they're dead.


Oh yes. Is it just writers who do this? Or all assholes?

Here's Ari Weinberg, in response to me: 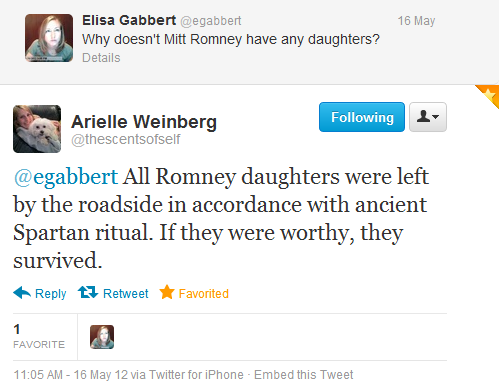 I still think it's fucked up that he only has 6 or 7 sons. EXPLAIN.

And this from Daniel Nicholls after getting a notification from LinkedIn that "Sky Ram has indicated you are a friend": And speaking of Zizek:

Sommer Browning ‏(@VagTalk): 50 bucks says Zizek is eating a donut at any given time.


Honestly, I don't even know what that means.


They are SHIT, right?


Because people are overall idiots.

Dana Tommasino ‏(@figmentspot): Oh. RT @lit_hum: The self forms at the edge of desire, and a science of self arises in the effort to leave that self behind. - Anne Carson


I love Anne Carson the most, but no matter how many times I try to read this tweet, understanding-wise, I never really get past the "Oh."


Nearly indistinguishable from the actual Republican platform, am I right??

Michael Robbins (‏@alienvsrobbins): Well, you can't expect competence from a company that would greenlight the slogan "what can brown do for you"


My response was "UPS prefers the term 'brownlight'"

Rotating Skull (‏@rotatingskull): The Bible is very clear on the matter. Marriage is between one man and about seven or more women. A sheep trade may be involved.


Again, nearly indistinguishable from ... something.

Eric Raymond ‏(@pontiuslabar): "At the job after the job after this job," is probably the wrong answer to the interview question "Where do you see yourself in five years?"