Some Notes on Beauty Part Whatever (Selfie Edition)

I think we've achieved Peak Selfie: There is a tweet containing the word "selfie" in my Twitter timeline at all times.


Selfies are interesting because they show you how other people see themselves. We only have so much control over the photographs of us that other people take and make public in the world, but with selfies, we have complete control; we "curate the experience." We choose the angle, the expression, the filter, etc., and we only share it if we feel it's a positive reflection (ha ha, since the front-facing camera takes a reverse mirror image) of the self. A selfie says, "This is how I think I look." Because contrary to the feel-good idea that people think they are uglier than they are, most people identify with the flattering image of themselves, not the one with the bad angle or the sour expression. We think, That's how I look, not like that. The fact that we mostly experience our own appearance in a mirror means that we only identify with that version of the image, the angle we choose to look at ourselves with. This creates the illusion that cameras somehow capture sides of you that don't exist, when, in fact, other people can see your bad angles and sour expressions all the time. When it comes to other people's appearances, we have a fuller sense of object permanence, or perhaps color constancy is a better metaphor: Change the lighting and we still see the apple or the car as red. And other people always look like themselves. But we don't have this same sense of constancy when it comes to our own appearance. Maybe newscasters and actors who see themselves on film a lot really know what they look like, or come close to knowing. But I don't feel that I know what I look like. When someone tells me that a photo looks nothing like me, I can't make sense of it, because I don't know what they think I look like, and I don't know which photos do look like me. I mostly experience photos of me as looking like other photos of me.

At the gym earlier this week, I caught the last 15 minutes or so of Ghost, which I hadn't seen since high school. There's a scene where a man realizes he's dead when he sees his own body lying bloodied in the street, having been smashed between two cars. I wonder, would I even recognize myself at a distance? A while back on Twitter, Michael Robbins said about a guy in a commercial, "He looks exactly like me and it's so annoying." I found that fascinating, because I've never seen anyone that I thought looked like me. I don't know if it's because my face has an unusual arrangement (that I genuinely don't look like very many people) or because my mental image of my own face is too vague (the way you remember a face from a dream, or someone you've only met once or twice) to trigger pattern recognition.

P.S. My brief essay on Karen Green's Bough Down, a beautiful hybrid book containing collages and something like prose poetry, is up at Lemon Hound:


“It’s hard to remember tender things tenderly,” Green writes. It’s both apology and apologia for the memoir – it’s hard to remember things accurately; it’s hard to remember, full stop. Bough Down is as much about memory as it is about grief. Memory of the lost thing is a kind of tyranny – those hours she refuses to have, taking pills to sleep or forget – but also a gift, a form of access to the past she reluctantly accepts as an only option.

It's one of my favorite reads from the past year. Put it on your Xmas list!
Posted by Elisa at 10:58 AM 10 comments:

I've noticed a strange phenomenon on Wikipedia recently. It was always plagued by a subtle, pervasive, systemic bias (sexism, racism, etc.) but there was a superficial veneer of objectivity: neutral language, and flags where the tone deviated from the norm or where opinions or dubious facts were offered without citation, which seemed relatively rare. In a way, this layer of "truthiness" made the problem worse, since the average user would be persuaded that the information on Wikipedia was accurate and unbiased.

Lately, Wikipedia seems to have lost many of these markers of objectivity. Is it because the site is now so expansive that it cannot possibly be managed, a kind of failure by success, Roman Empire–style? Stripped of the gestures toward neutrality, Wikipedia is becoming a kind of massive, living artwork: crowdsourced conceptualism. I find it rather beautiful: a bizarre, fictive, everchanging collage. A wabi-sabi Frankenstein text. For example, see the below sentences I've run across in recent weeks:


It has been written, inaccurately perhaps, that German is the only language that allows (us?) to penetrate the horror of Auschwitz, to describe death from within.

That's from the page on Paul Celan. The source cited is a French text; is this the Wikipedia editor's translation, a translation he was unsure of, hence the parenthetical? (Let's be honest, odds are the editor was a man.) Or is this a direct quote presented without quotation marks? And if so, who said it? Shouldn't this kind of obfuscating passive voice by flagged or banned? If it wasn't Celan, and there's no indication that it was, how it is relevant to the page?

The page on the Storming of the Bastille seems to be wholly plagiarized from a British history book (note the formal tone and alternate spellings):

The commoners had formed the National Guard, sporting tricolour cockades (cocardes) of blue, white and red, formed by combining the red and blue cockade of the Paris commune and the white cockade of the king. These cockades, and soon simply their colour scheme, became the symbol of the revolution and, later, of France itself.

At the top of this page, an inconspicuous note: "This article includes a list of references, but its sources remain unclear because it has insufficient inline citations. Please help to improve this article by introducing more precise citations. (July 2011)" Next to this note, a question mark, not an exclamation point or a red flag. It doesn't seem to have caused much worry in the past few years. (Nothing like the debate over the "the" before "Beatles.")

Then there's Barbara Daly Baekeland, whom I looked up after watching Savage Grace. There's not much information on the Internet about her, but here's Wikipedia's sexist editorializing (italics mine):


Returning to Spain, Barbara accepted the extent of her son's relationship with Cooper, but preferred his developing relationship with a young Spanish girl, Sylvie. However, Sylvie started an affair with Brooks. After discovering the affair in February 1968, Barbara again tried to commit suicide. Brooks decided that he had had enough of Barbara's behaviour, and decided to pursue a divorce. This led Barbara to severe depression and a further suicide attempt, from which her friend Gloria Jones, wife of author James Jones, saved her.

In 1969 she met Samuel Adams Green, with whom she started an affair. Later introduced to her son, noted pop art curator Green was very unimpressed by his artistic capabilities. After six weeks, Green broke off the relationship, although Barbara was still obsessed by Green. She pursued him relentlessly; when she returned to the United States that fall, she walked barefoot across Central Park in the snow wearing nothing but a Lynx fur coat to demand entry to his apartment.

I hope Wikipedia just gets weirder and weirder as it expands, a kind of paranoid-schizophrenic, Fox News version of the world that, thanks to embellishments and extra u's, is eventually larger than the world.

If you see a good example of Bizarro Wikipedia, please leave it in the comments. I want to collect these.
Posted by Elisa at 11:57 AM 16 comments:

Just a reminder that I have two readings this weekend in Colorado:

And here are details for my Boston launch next Friday, Nov. 15 at Sweetwater Tavern: 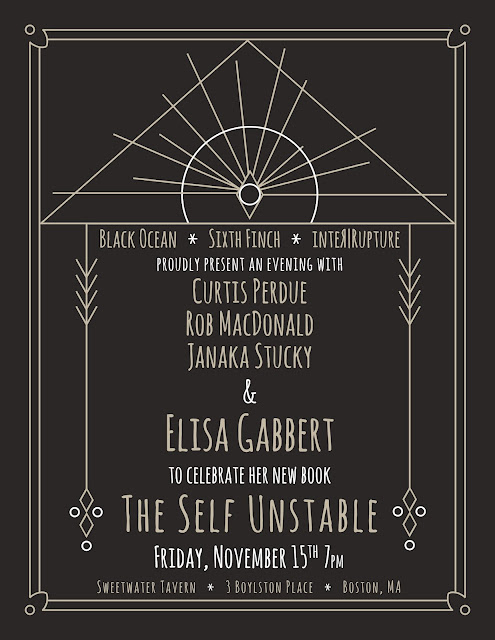 I'll be reading from The Self Unstable as well as some new work that I'm a little nervous about. I hope to see you soon, East Coast and No-Coast friends!

What else can I tell you? I saw an amazing performance piece with piano, electronica, and poetry last night, performed by Jon Woodward and Oni Buchanan. The piece, Uncanny Valley, was composed by John Gibson using text from Jon's poem of the same name. It was funny but supremely creepy, especially when Oni reached into the guts of the piano and scraped a credit card against the strings, which sounds like someone being murdered.

I've been reading Young Tambling by Kate Greenstreet. I want to channel Kate at my upcoming readings; when she reads, she already sounds like she's channeling something else; it's hypnotic. I also read City of Tomorrow by Chad Reynolds, a lovely, strange chapbook about a transsexual in Oklahoma City. Example line: "My emotions are clear but my body is not."

Have you seen this movie, 8 Femmes? It's so fricking cute: 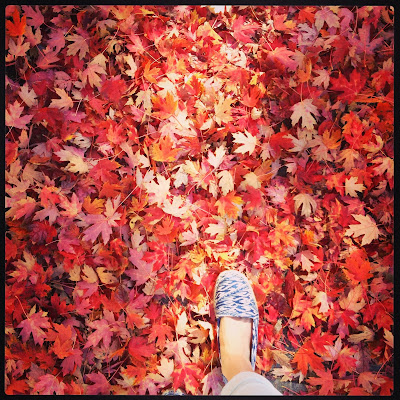 The November issue of the Volta has a forum on poetry criticism and reviews, with thoughts on the state of the art from Jordan Davis, Sina Queyras, Vanessa Place, Michael Robbins, Raymond McDaniel, Charles Bernstein and a number of other smartypantses, including me! Here's my answer to the last question:


What advice do you have for critics and poets new to review writing who’d like to get started writing book reviews?

Mostly just read more – both more poetry and more criticism. Look for great, smart, articulate writers who love poetry and read what they write about it. Beware of any critic who seems more invested in asserting his opinion than describing the poetry. Read with a pencil, underline, make notes, dog-ear pages. One wrong way to write a review is to spend too little time with the book, to come to it with a closed mind or a preconceived idea of what it should be, and then write your review as a kind of rationalization of your kneejerk opinions. Another wrong way is to like it but have nothing interesting to say about it, thus filling your page with empty adjectives like “beautiful” or making weirdly aggressive statements like “I loved this book so much I wanted to tear off my own head and stuff the pages down the hole.” Don’t laugh, I see that a lot. Another way to put this is, only write about books that really make you think. If you’re not having thoughts, move on, or read it again and think more.

You can read the rest of my responses here.

The new issue of Split Lip Magazine includes three collaborative poems by Kathleen Rooney and me.

At Bois de Jasmin, I reviewed L'Eau Mixte (my favorite grapefruit scent) and talked about perfumes that feel like costumes (happy belated Halloween!).