Some thoughts on the line in poetry

The importance of the "line break" in poetry is overstated. Yes, enjambment is a powerful tool, but all parts of the line are important. You can't turn any set of words into a great set of lines just by fussing with the breaks.

The beginnings and ends of lines are thresholds. Breaks are like exits, beginnings are entrances. Too many poets put all their focus on the exits.

The ambiguous line break (a break on a polysemous word, such that the meaning is unclear until you raster over to the next line) is one of the most overused tricks in all of poetry. Half the time the ambiguity doesn't even serve the poem; some poets seem to think this is what line breaks are for, to create cliffhangers and confusion.

I remember bringing a poem to a graduate workshop that included the line "stuck in a running-across shape" (poem about a dead squirrel, pretty cool) and someone (multiple someones?) advised me to change "a" to "the" and break on "running," like so:

the spot where it was last
alive, stuck in the running-


This emphasizes the phrase "in the running," creating an ambiguity, like the squirrel is still "in the running," on the side of the living, in the rat race. In retrospect this was terrible advice; what good is ambiguity based on a cliche?

A much more interesting kind of ambiguity through enjambment happens at the level of syntax, as in these Ashbery lines (I typed up the whole poem here; sorry if only seeing the closed end of the parentheses drives you bonkers):

Then later it's forget-me-not time, and rapturous
Clouds appear above the lawn, and the rose tells
The old old story, the pearl of the orient, occluded
And still apt to rise at times).


In the linked post above I was talking about the importance of obscurity in poetry, how lack of clarity, even incoherence allows meaning to bloom. Here's what I wrote about the break at "rapturous":

Another big thing that makes a poem a poem and not something else is the tension between the line and the sentence. "Then later it's forget-me-not time, and rapturous clouds appear above the lawn" is a fine sentence, but before you get to the clouds, you are forced to pause a moment and concentrate your thinking on the partial sentence: "Then later it's forget-me-not time, and rapturous." We don't yet know that the clouds are rapturous, and so we assign the adjective back to "time." In poem-space, "rapturous" does refer back to time, just as much as it refers forward. Ashbery's choice to break the line there makes the referent ambiguous, so it's a blooming moment.


See what I mean? The word itself is not ambiguous, it's not a homonym; the syntax is ambiguous.

There's another use of the line break that I've been interested in recently, where the break signals a sudden shift in voice, often a disagreement as though the poem were an argument with itself. For example, in this stanza from Ben Lerner's Mean Free Path:

A cry goes up for plain language
In identical cities. Zukofsky appears in my dreams
Selling knives. Each exhibit is a failed futurity
A star survived by its own light. Glass anthers
Confuse bees. Is that pornography? Yes, but
But nothing. Come to reference. A mode of undress
Equal to fascism becomes obligatory
In identical cities. Did I say that already? Did I say
The stranglehold of perspective must be shaken off

The break I refer to is "Yes, but / But nothing." In the tiny pause between lines, an about face. The break introduces a conflict. There's a lot of this going on also in Alice Notley's Culture of One. See "Cellulite":

The pretty cell of your womb presents you with the light of Eve Love.
She shoots heroin of course. Everything turns blue
I'm afraid when it wears off I'll want to do it again.

There, in the space between line 2 and line 3, "she" becomes "I." There is no signal of the shift except for the break. (Often in these breaks there is no punctuation, no period or dash as you would see in prose, which only heightens the abruptness of the interruption.)

Perfect lines make you forget about the notion of the line break entirely. I never think about Wallace Stevens's "line breaks." Reading Stevens, you don't get the impression that he writes sentences and then breaks them into lines, you get the impression that he writes in lines. Or take these lines from "The Love Song of J. Alfred Prufrock," one of my favorite stanzas of all time:

I have seen them riding seaward on the waves
Combing the white hair of the waves blown back
When the wind blows the water white and black.


One can't imagine these lines occurring otherwise. The only response is to lie down before it and play dead.
Posted by Elisa at 1:58 PM 28 comments:

State of the union

2013 was an extremely hard year. I spent the first half of 2014 feeling like I'd finally adjusted to the new reality. But suddenly whatever wisdom or peace of mind I had achieved is gone again. It's perhaps not that the struggle in itself is so bad, but that no one I know is struggling in a similar fashion; there's a perceptible struggle gap. They may have their own struggles but they're of an entirely different nature. I feel lonely and somehow cheated, like I arrived at the wrong ending of the Choose Your Own Adventure. Ugh, sorry so maudlin.

Anyway I realized I hadn't blogged yet this month. So I thought I'd check in and tell you what I've been up to.

In May I read Two Serious Ladies by Jane Bowles, which was fantastic, sort of literally in that it's not particularly realistic. The characters are outwardly irrational — their motivations unclear and unexplained — but this is what makes them so compelling, and in any case they seem to be operating under some self-imposed, opaque but internally consistent moral code (which has naught to do with the prevailing moral codes of the setting/s). The dialogue is very funny, but it leaves you shaken. It's somewhat like The Heart Is a Lonely Hunter in that the end is so unsatisfying as to be upsetting — meaning not that it's badly written, but that you hate what happens to the characters, hate watching their lives be ruined, which is like life I guess. (Bowles apparently considered Carson McCullers to be her literary rival, in the sense of a more commercially successful contemporary working in a similar grotesque style.)

Next I'm reading 10:04, Ben Lerner's newest, which reminds me a little of both Taipei and Open City so far. (Got that obligatory global warming reference in the first 20 pages.) See also my notes on Leaving the Atocha Station.

Rewatching the first four seasons of House on Netflix. The best episodes are the two 2-parters, the one where Foreman gets sick and the one where Amber dies. 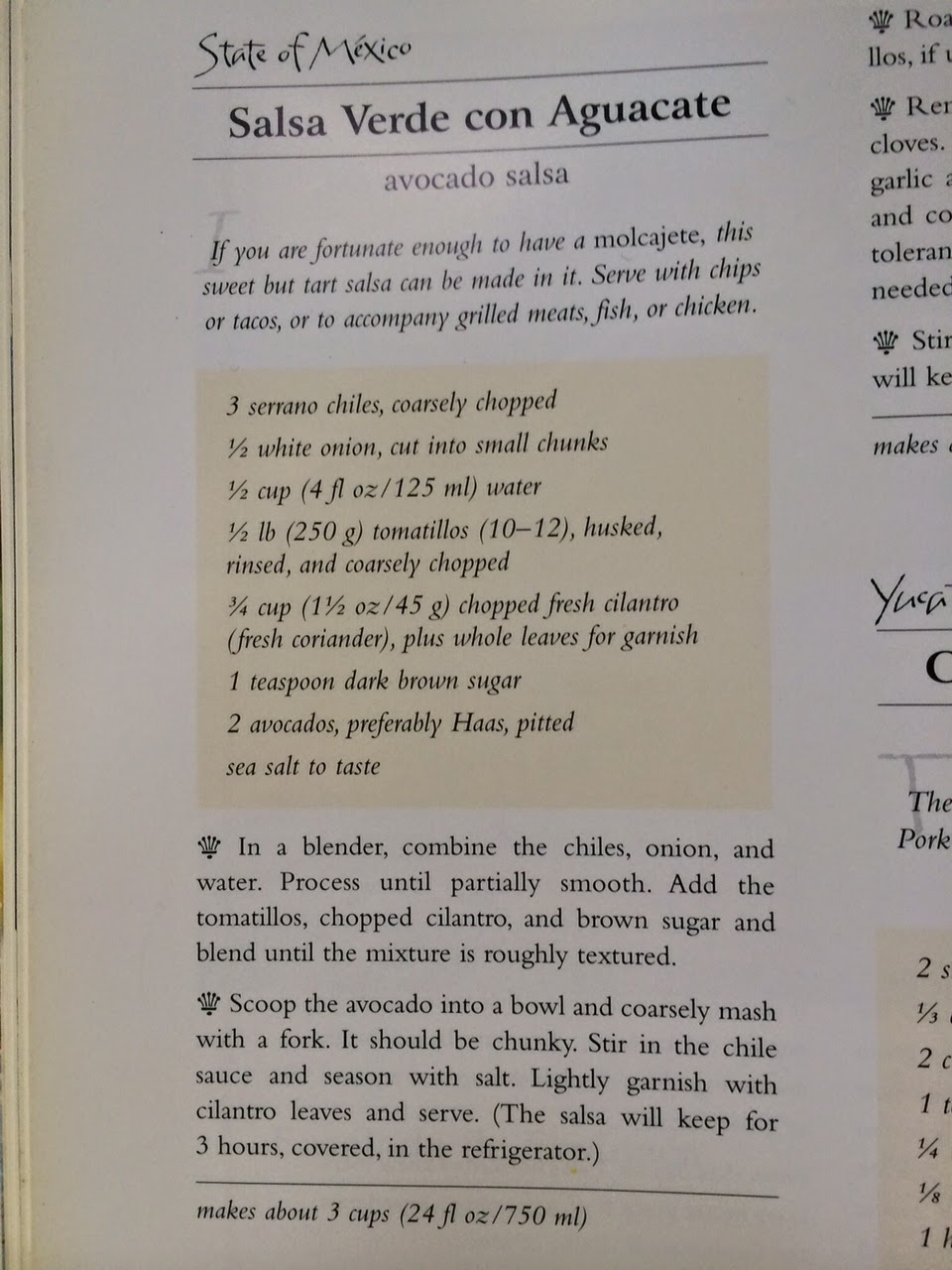 Ignore that "3 hours" part at the end; it'll keep for a couple days in the fridge. But I usually split the tomatillo mixture into two batches and just make one avocado's worth at a time.

Moving. Our rent is going up pretty steeply when our lease renews, as it has every year since we've been here, and though I'm loathe to invite all the logistical nightmares of moving into my life right now, I want to stick it to these jerks and get out of here. I'm even considering buying, which may be a crazy idea. Is that a crazy idea? I need some stability in my life.