Some Notes on Influence (inspired by Noah Eli Gordon)

I’m just getting around to reading Novel Pictorial Noise by Noah Eli Gordon, which was selected by John Ashbery for the National Poetry Series and published by Harper Perennial in 2007. It’s pretty remarkable. By stacking up big, vague, abstract Latinate terms, he creates complex sentences that appear to be rich with meaning and knowledge, but upon inspection, mean almost nothing, because none of the terms are well-defined. The near-meaninglessness of the prose poems on the recto pages is highlighted by the true meaninglessness of the fragments (erasures?) on the verso pages – each open page looks like this (click the image to enlarge): 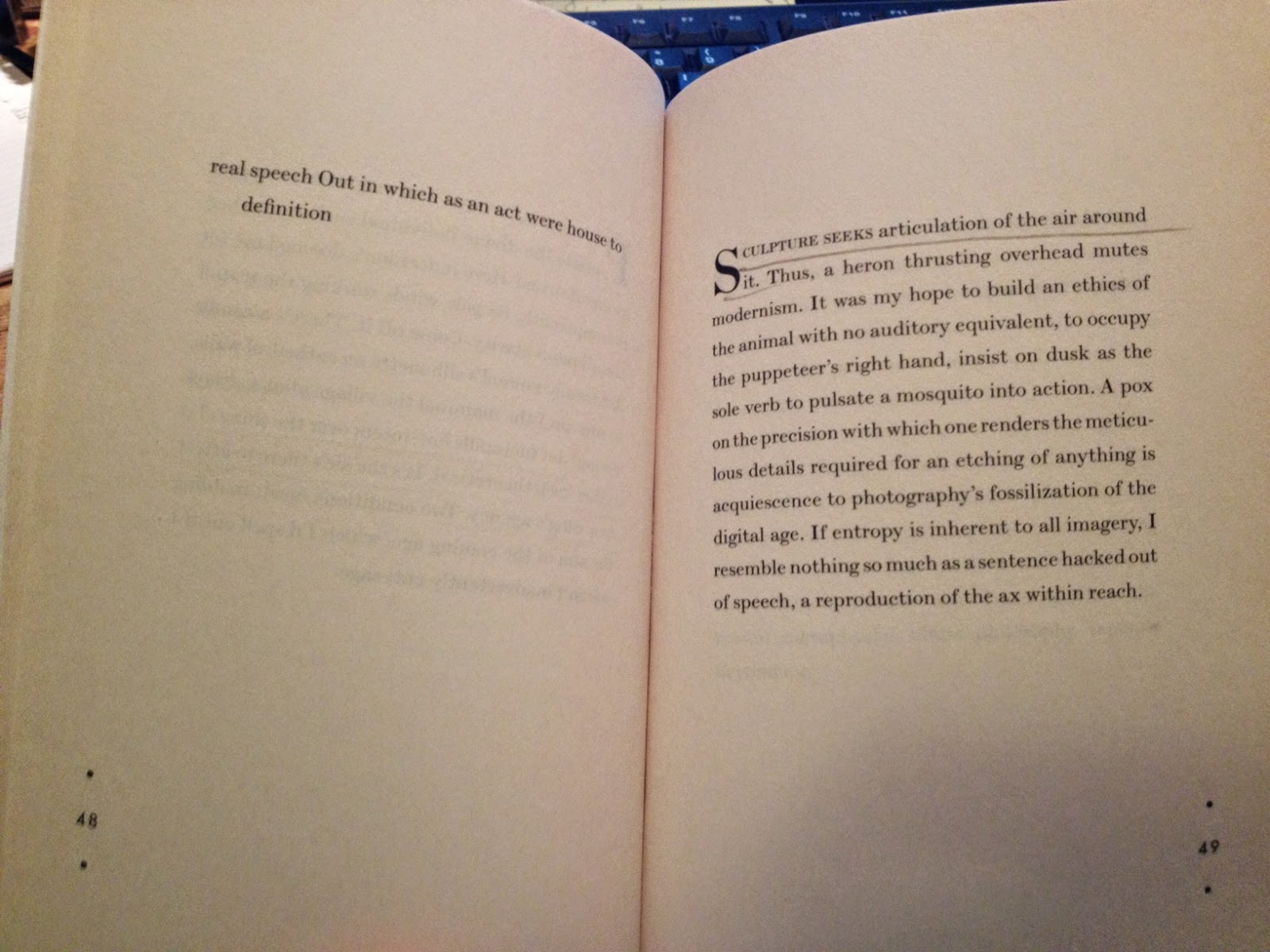 As such the poems become pure syntax and vocabulary, sentences for the sake of sentences, with the ideas seemingly just beyond view, obscured by the foliage. For example: “What example doesn’t contain the blooming topography of its own terminology?” Or: “The grand narrative the end of narratives had had had had no grandiose ending.” This is very much how Ashbery’s poetics work. And, as in Ashbery, the fog will break and reveal the occasional moment of crisp truth. (“By definition, actors are interchangeable.” Or: "The world's not weirder than we think, but weirder than we can think.") In fact, reading Novel Pictorial Noise, I feel that I better understand Ashbery.

Here’s one in full, to better see their diagrammatic beauty:

If you see the straight highway before you is permanently closed, then a picture is conjured to fix ambiguity. Although a rope doesn’t ask for its knot, any expression is merely detour dressed with intention, a side road muddied from constant use. Why should a thread understand a carpet? Unimportant that my arrows point anywhere, accidental that an actual wind moves them. As always, this road ends behind us. Why should a machine be anything other than a picture of itself, when meaning and purpose read as vestments of design and one has the burden of officiating doubt on one’s mind?

(The poems usually end on a rhyme, a funny little “yes, this is poetry” flourish that reminds me of Bach.)

Funny story: I learned recently that Noah Eli Gordon has confused me for years with another person, namely a woman that John dated on and off before we met. Once, this woman, who was also blonde but otherwise looks nothing like me, met NEG at the Boston Poetry Festival and told him she was a fan of his work. A few months ago, he recounted this memory to me, and I had to admit he was thinking of someone else.

I wonder if this false memory had any influence on the way he read my poetry. In any case, NEG taught The Self Unstable in his class at UC Boulder last semester, and I visited the class to do a reading and Q&A. We had a few minutes to spare beforehand, so we hung out in his office, and he gave me copies of all his books. He remarked that he thought I’d find Novel Pictorial Noise to be similar in interesting ways to my book. And yes, of course, I do. I’ve remarked before that I often lament I can’t write more like Ashbery, or perhaps it’s just that I don’t; when I sit down to write, Ashbery is not what comes out. But in Novel Pictorial Noise, I see a link between my poetry and Ashbery’s, suggesting we have a common ancestor after all.

I’ve been thinking a lot about influence lately. The only real anxiety in my influence is that I don’t have (m)any influences, at least not intentionally – I’m not good at imitating my “heroes,” and I don’t really believe in heroes, literary or otherwise. People, even heroes, let you down. But who knows how these things work? I was reading a lot of Anne Carson in college and grad school, and would have loved to have someone compare me to her. Nobody did, with good reason. Instead they compared me to Frank O’Hara. Now that I’m not reading Carson, people are saying The Self Unstable reminds them of Short Talks. It’s like the “watched pot never boils” theory of literary influence: only when you’re not trying.
Posted by Elisa at 8:04 PM 10 comments:

Kate Colby's I Mean, forthcoming from Ugly Duckling next year, is going to blow your mind. I love love love this essay called "The Needle," which is about writing and art and monuments and memory and pain; here's an excerpt:


Does some pain mean more than other pain?

A baby is born and left to die on an open plain. It has a name, but doesn’t know it.

Pain is a fuzzy gray dot with definite dimensions that can’t be measured, except on a personal scale. Hospital nurses will ask you to rate your pain from one to ten before administering medication. This task is difficult for me. Am I ranking my pain against itself or against all other pain I’ve experienced? I’m fortunate to have only ever been hospitalized during and while recovering from childbirth. Both times I felt the pain of labor and childbirth itself to be very lonely, and I can’t explain why this is. It goes against my desolate sense that if pain has meaning, it has to do with the extent to which it is witnessed. Surely the experience of giving birth to a child is one of the most painful. Surely being born is another. But while mother and child simultaneously, symbiotically suffer and witness, neither knows nor thinks of the other’s pain, and maybe that’s what makes it so lonely—it’s a pain mutually witnessed and mutually unheeded by two entwined people, the physical part of whose attachment is but a taste of the crushing, comprehensive conjoinment to come.

If witness makes pain mean, so might remembering—memory makes you your own ongoing witness. But one can neither remember the pain of one’s own birth nor call back the pain of childbirth. And while the pain of childbirth is to be dreaded, it does not matter so long as it’s behind you, even if you want it to. Why is it that the memory of one’s own physical suffering is not usually troubling, but the anticipation of future suffering is? And yet, knowing that a loved one has suffered before death is terrible. But knowing that a loved one has suffered and then survived is not very terrible at all. In any case, one is not suffering now.

An unnamed baby is born and left to die on an open plain. (You little black hole.) (Shut up.)

You can read the whole essay here, in The Volta.
Posted by Elisa at 12:15 PM 4 comments: