Hi friends! I'm excited to have a feature piece in Guernica's special issue on the future of language. It's about translation across language, culture, and time, and touches on color perception, emoji, fictive details as cultural signifiers and lots of other stuff. You will like it! Here's a taste:


Thought experiment: try to imagine an untranslatable color, a color term from Swedish or Swahili that English has no equivalent concept for. It’s hard because there’s only one spectrum of visible light, and humans all have the same color receptors (red, green, and blue). Once you have a robust color vocabulary it’s easy to describe, or “translate,” any color you can imagine – like X but lighter; like Y but more blue. (Birds’ eyes have a fourth receptor, for ultraviolet; perhaps owls and hawks see untranslatable colors.)

There is such a thing as an “impossible color,” and ways to trick yourself into “seeing” a shade like “reddish green.” They involve optical illusions, not the kinds of mental gymnastics some people do to visualize multi-dimensional objects like hypercubes. I don’t follow the Twitter account @everycolorbot because—when I see the swatches retweeted into my stream—I often have the jarring, even horrifying impression that the colors are impossible, that my eyes are being forced to process, say, yellow and purple at the same time. I don’t know why this is (subpar screen resolution?), but I wonder if the effect would be lessened if the hues were identified by name versus RGB code, as “celery flake” versus “0xd4d88e.”

You can read the whole thing here. (The rest of the issue is going up this week.)

As a kind of side project to this essay, I wrote a little piece called "Fair Usage" on the politics of dictionaries and the naivete of descriptivism:

However, in the 15 years that have passed since I completed my linguistics degree, I’ve realized that descriptivism can quickly succumb to its own kind of smugness; it forms its own set of shibboleths and rules. There’s often an insider-y smirk lurking behind the declaration that “language changes.” Yes, language changes — everything changes, Q.E.D. But there’s room in the middle for language moderates who can tell the difference between, on the one hand, arbitrary, baseless, unenforceable rules and, on the other, a refusal to correct even obfuscating or harmful errors.

You can read it at the Smart Set.

My longtime Twitter friend, now an editor at Catapult, Mensah Demary interviewed me for the Rumpus; we talked about poetry, essays, politics in publishing, how much I know about Drake and other interesting stuff:

Rumpus: What was your initial thought to the National Review commenting on your column on white male poets over at Electric Literature, in which you wrote, in part, that the literary community “no longer accepts the white male perspective as default” ?

Gabbert: Fear. Seriously. It wasn’t a thought so much as an autonomic reaction. I had to get on a plane that day, and I anticipated landing and checking my phone to find my inbox flooded with death threats. But people who read the National Review would apparently rather talk amongst themselves. A friend (a white male!) read the comments for me and reported, “The comments on your piece are obviously terrible, but they are nothing compared to the cesspool of horrors that is the comments to the National Review article.” Anyway, once I realized that I wasn’t going to have to shut down my Twitter account, I relaxed. Being an enemy of the nut-job far-right feels kind of good.

Rumpus: You sent me a draft of the column before you published it, and I gave my opinion on it (the column was spot on, and it still is). I feel a little culpable though. Maybe I could’ve given better advice? Is there anything you think you could’ve done differently?

Gabbert: No way. I stand behind my advice. I think it’s (so, so) telling that I’ve never seen anyone react angrily to the advice that women/POC should submit more and pitch more—but look at the insane amount of ire I inspired by suggesting that white men slightly modify their behavior. (And in the direction of less work! Not more work!) Of course, of course—of course it’s on us to conform to the system that oppresses us. 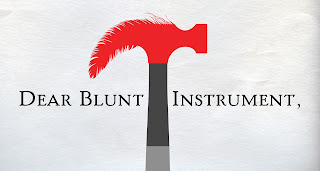 I also have a new Blunt Instrument column up, in which I talk about what fiction is supposed to do:

I’m sure you’ve heard the idea that “literary fiction” is just another genre, like science fiction or romance, as opposed to, as some would have it, “better fiction.” Let’s just say for the sake of argument that it is—what features distinguish literary fiction from other genres? Often people say that literary fiction foregrounds language over plot, but that’s not always the case. (For example, I don’t think of Kazuo Ishiguro’s writing as particularly “languagey.”) To my mind, one of the main reasons we call something “literary” is because you can talk about what it’s “about” without recounting the plot.


If you have a writing question for me, send it to blunt@electricliterature.com.
Posted by Elisa at 8:24 AM No comments: